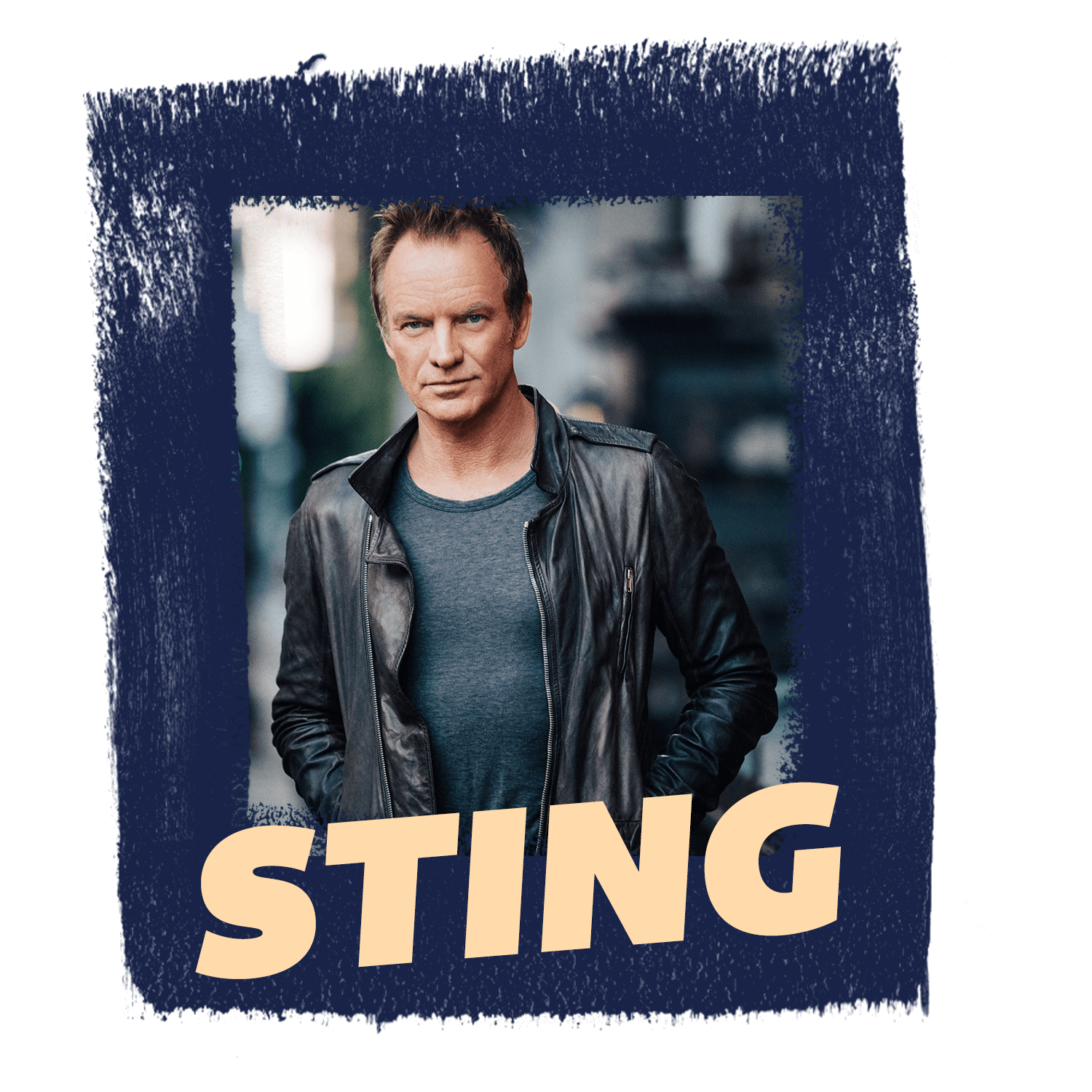 Sting: My Songs will be a rollicking, dynamic show focusing on the most beloved songs written by Sting and spanning the 16-time Grammy Award winner’s prolific career with The Police and as a solo artist. Fans can expect to hear “Englishman In New York,” “Fields Of Gold,” “Shape Of My Heart,” “Every Breath You Take,” “Roxanne,” “Message In A Bottle” and many more, with Sting accompanied by an electric, rock ensemble.

Composer, singer-songwriter, actor, author, and activist Sting was born in Newcastle, England before moving to London in 1977 to form The Police with Stewart Copeland and Andy Summers. The band released five studio albums, earned six Grammy Awards and two Brits, and was inducted into The Rock and Roll Hall of Fame in 2003.

As one of the world’s most distinctive solo artists, Sting has received an additional 10 Grammy Awards, two Brits, a Golden Globe, an Emmy, four Oscar nominations (including 2017’s nomination for “The Empty Chair” from JIM: THE JAMES FOLEY STORY), a TONY nomination, Billboard Magazine’s Century Award, and MusiCares 2004 Person of the Year. Also a member of the Songwriters Hall of Fame, he has received the Kennedy Center Honors, The American Music Award of Merit and The Polar Music Prize. Sting has been awarded Honorary Doctorates of Music by the University of Northumbria (1992), Berklee College of Music (1994), University of Newcastle upon Tyne (2006) and Brown University at its 250th Commencement ceremony (2018).

Following his critically-acclaimed album, 57th & 9th, his first rock/pop collection in over a decade, Sting and reggae icon, Shaggy released a collaborative, island-influenced album, entitled 44/876, that draws from the many surprising connections at the heart of their music. With its title referencing their home country codes, 44/876 first and foremost honors the duo’s love for Jamaica: Shaggy’s homeland, and the place where Sting penned such classics as The Police’s “Every Breath You Take.”

In the summer of 2018, Sting and Shaggy embarked on a tour of various historic venues where the two Grammy Award-winning artists performed their most celebrated hits as well as songs off their new album, together, combining members of their respective bands. The critically-acclaimed 44/876 World Tour also travelled through North America, South America and Eastern Europe.

Throughout his illustrious career, Sting has sold close to 100 million albums from his combined work with The Police and as a solo artist.

He has appeared in more than 15 films, executive produced the critically acclaimed A Guide to Recognizing Your Saints, and in 1989 starred in The Threepenny Opera on Broadway. His most recent theatre project was the TONY-nominated musical The Last Ship, inspired by his memories of the shipbuilding community of Wallsend in the North East of England where he was born and raised. The show, with music and lyrics by Sting, ran on Broadway in 2014/2015 and completed a critically-acclaimed UK regional theatre tour which ran from March-July 2018. Next year, Sting will star as shipyard foreman Jackie White in the Toronto-based production of The Last Ship at the Princess of Wales Theatre from February 9 through March 24, 2019.

Sting’s support for human rights organizations such as the Rainforest Fund, Amnesty International, and Live Aid mirrors his art in its universal outreach. Along with wife Trudie Styler, Sting founded the Rainforest Fund in 1989 to protect both the world’s rainforests and the indigenous people living there. Together they have held 18 benefit concerts to raise funds and awareness for our planet’s endangered resources. Since its inception, the Rainforest Fund has expanded to a network of interconnected organizations working in more than 20 countries over three continents.